LOOK OUT, HERE COMES ANOTHER RAVE! 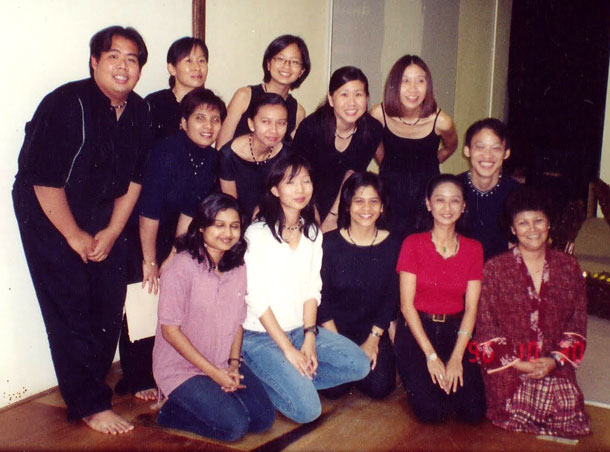 Members of the Gamelan Club in a rare group portrait

Antares angles for a KICKBACK from the Gamelan Club

How much does a minister get paid? RM9,000 a month? RM15,000? Okay, let’s say RM12,000. How much in kickbacks? Hmmm. Well, I’d be willing to take on a ministerial post for a year or so, just so I can make sure the Gamelan Club gets it own gamelan, instead of having to rent a set for practice sessions. And I’d make it a point that arts funding is channeled only to those with proven talent and pride in their craft, not to extravagant exercises in neo-fascist propaganda staged in glittering palaces.

Being a minister may get my hands dirty, but at least it’s an alternative to writing online reviews and being accused of gushing whenever I stumble upon something really fantastic. Yikes, I’m trying so hard NOT to rave, this review might turn into a self-indulgent ramble.

Perhaps I ought to begin with some mild criticism of what may well have been the new millennium’s most exciting breakthrough in Malaysian music, apart from Saidah Rastam’s emergence as an internationally recognized composer.

The amplifier in The Actors Studio Theater at Dataran Merdeka hums audibly and this annoyance was like a smudge on the lens marring an otherwise perfect composition.

It would have prolonged the pleasure if a brief intermission had been inserted two-thirds into the program. Forty minutes is a comfortable duration for the ears. Instead we were treated to more than 80 minutes of bumper-to-bumper gamelan experiments; and though none of it was boring or mediocre, too much of a good thing at one sitting is inadvisable. A short pause for some fresh air (or a hit of nicotine) would have been most welcome. The Gamelan Club, in their irrepressible enthusiasm, left us little time to absorb and integrate the very novel and invigorating sounds we had just heard.

This ensemble is destined to go places. It would help if the male members of the Gamelan Club didn’t dress like paramedics or overaged sixthformers. The women all looked like earthy, fun-loving angels. I kept thinking the group would gain greatly in visual appeal if the guys were less conservative in their apparel. Nonetheless, the sheer exuberance and easy camaraderie of the group made their vivacious performance a tremendous joy to watch.

And what of the music? The Gamelan Club successfully blends musical integrity with popular accessibility. The introduction of electric guitar and 6-stringed bass (gracefully and tastefully played by Isyam Swardy Daud and Zailan Razak) was handled with wonderful finesse and sensitivity.

Take a bow, musical directors Shahanum Shah and Jillian Ooi, not least for the exemplary way you have instilled inner discipline in such a large group of diverse individuals without stifling their spontaneity. The fact that there was no visible leadership or hierarchical displays during the performance is proof that democracy works – at least in the arts.

The resonant tones of the gamelan evoke courtly scenes of regal splendor. It is indeed the music of gods and world-conquerors, heard throughout most of Southeast Asia, from Burma to Borneo since the start of the Bronze Age. Gamelan players treat their instruments with reverence, remembering their ancient pedigree and mystical kinship with other pitched percussion instruments like the marimba, the t’rung, and the xylophone.  A gamelan orchestra usually consists of a few sarons (bronze xylophones) accompanied by bonangs (small breast-shaped bells), and a variety of large gongs.

For this performance the Gamelan Club had 14 members playing, apart from the traditional gamelan, a wide range of ethnic drums (including Malay gendangs and an African djembe, impishly played by the precociously percussive Mohd. Kamrulbahri Hussin) plus contemporary stringed instruments (acoustic and electric guitar, 6-stringed bass, and 3-stringed Thai lute). The only thing missing were winds. 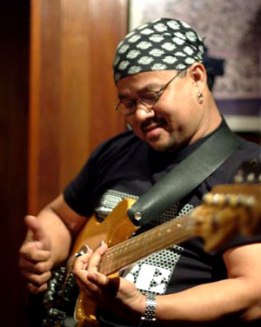 The effect was nothing short of mesmerizing, especially since the gamelan retained its characteristic nobility and sonority throughout. New genres in world music were generated by this bold synthesis of traditional and contemporary musical modalities: gamelan funk-fusion, gamelan pop, gamelan symphonic, even a touch of gamelan rock. Others have attempted it before, but never with such authentic dedication to the gamelan mystique and its hypnotic and elevating qualities.

Gaia, composed and arranged by Susan Sarah John, was a glorious paean to Mother Earth’s beauty in an ethereal “new age” mode. Malu-Malu Kucing, composed and arranged by Jillian Ooi with lyrics by Juliana Mohamed, was an amusing vocal duet rendered in vintage asli style. Zailan Razak’s Putra Variation No. 2 was a daring showcase for his superb, Stanley Clarke-ish jazz-funk basswork, and Sluku-Sluku Bathok (pardon my French) was a happy marriage of whimsical keroncong and hardcore jazz.

I think it was the intricate bonang passages in the elegant finale, Kosalia Arini, that reminded me of Burmese opera (heard blaring from battered radios on the shores of Inle Lake). But the evening’s highlight for me was a beautiful pop ballad written and sung by Maya Abdullah, Don’t Speak Too Loud, which stands a chance of extensive airplay and could turn out to be the album’s chart-topper when released.

I certainly hope someone rich has the aesthetic sense to step forward and offer financial support to the Gamelan Club. They’re ready to record a groundbreaking album, but they should opt for a live rather than studio ambience. What they need is a series of performances in an acoustically supportive space – with state-of-the-art microphones and the services of an audio engineer experienced in field recordings of classical concerts.

Once the new, upbeat Gamelan Club has produced its own CD, they’ll be ready to take on the world. For a start, I expect they’ll be a big hit at next year’s Rainforest World Music Festival. It has been a 7-year gestation for the group, which attracted a surge of interest through the inspired leadership of Sunetra Fernando (who has since left to do her own thing in the UK), but this new incarnation of the Gamelan Club is simply too funky and too brilliant to ignore. If you’ve been having trouble feeling patriotic of late, the Gamelan Club will soon have you yelling, “Malaysia sungguh boleh!”

Tudong Farewell with members of the Instant Cafe Theatre

The program cover says it all: down in the highrise condo parking lot, nine patriots have made a deep impression on the bitumen.  As law-abiding, non-rioting Malaysians, they have scrupulously avoided landing in a space marked “Kosongkan”‘ (‘Leave Empty’).  On the roof edge from which they presumably performed their death-denying Millennium Jump, we see a pair of reading glasses, a watch, a rubber slipper, a cellular phone, and the day’s edition of Boleh! (the “”semua boleh” paper) sporting the headline: “WIN RM1 MILLION!  U-Chump Sdn Bhd offers once-in-a-lifetime prize to first 100 Malaysians who jump off Pangsapuri De’Sin!”

Absurd?  That’s life in Dr Mahathir’s Malaysia for you!  Although the newspaper reading taxpayer may not be aware of this until he or she has had the opportunity to attend an Instant Café Theatre performance.  The fact that ICT’s pungent political satire has been tolerated for the past 11 years indicates that the company has attained the status of National Court Jester Laureate and, as such, enjoys comedic licence to lampoon everything and everyone in sight – even Samy Vellu and his legendary acts of “Lunasy.”

The doctor may not agree, but laughter is indeed the best medicine.  Maybe it won’t cure our social and political ills, but even the most repressed society needs to let off a little steam; and the growing success of the Instant Café Theatre can be held up as proof that democracy thrives in Malaysia, whether guided or misguided.  In any event, ICT certainly boleh.  Although getting on national TV still tak boleh. When unintelligence and mediocrity get you down, who do you call?  Instant Café Theatre!  When you feel there’s little prospect for genuine talent in this country and you begin to entertain thoughts of migrating, what do you do?  Go see ICT!

It’s remarkable how invigorating it is to watch all your frustrations ventilated right on stage by this remarkable and intrepid troupe of lovable jesters led by the Chaplinesque Jo Kukathas. The line between reality and satire gets extremely blurred at an ICT performance.  Malaysians can endure ECT (Electro-Convulsive Therapy or Electorate Control Technology) but can they handle ICT?

Those experiencing ICT for the very first time are understandably nervous about laughing too loud, for fear that the person sitting behind them may be a secret policeman on overtime. My problem, during the first half, was the free teh tarik we were offered before the show.  Its diuretic effect caused me to suppress my mirth for fear of bursting my plumbing.  In fact, after a while it actually hurt when I laughed.  And the laughs came thick and fast with the Bolehwood Golden Dugong Awards and the Ramadhan Rap and Only Money Matters (in which two deputy ministers, YB and Oy, played to pee-squirting perfection by Zahim Albakri and Jo Kukathas – are interviewed about party infighting). It was absolutely excruciating.  Good thing the unforgettable Umbrella Girls skit by Nell Ng and Chae Lian came after the intermission (don’t linger too long in the loo or you’ll miss the festive “Raya Carollers” in the foyer).

Rashid Salleh, a refreshing new face in the ICT lineup, delivered a definitive non-performance (as the Defence Minister’s nephew) guarding the armory in the divinely inspired Al-Ma’unah spoof. Patrick Teoh and Edwin R. Sumun were enlightening as Yoda and Luke in Election Wars: Episode I – The Phantom Voter.

The immensely watchable Maya Arissa Abdullah, the very versatile Junji Gomes, and the wonderfully golden-voiced Shanthini Venugopal made up the rest of the superb cast in this production.  Lipraxedes Jumawan (better known as Dodong) performed his amazing “soundtrack” magic on keyboards. If national service were made mandatory in Malaysia, I would opt for a two-year stint with ICT rather than a couple of years under the ISA.

What’s the difference between a political satirist and a prisoner of conscience?  Their goals are essentially the same: to resensitize us to the malaise of our everyday milieu and prick our social conscience.  However, one does it through laughter while the other does it through tears. If you’re one of those unfortunates who has NEVER witnessed an ICT revue, I urge you to catch this jump before the millennium rolls over and dies.

I’m generally wary of using mobile phones, but so impressed was I with DiGi’s decision to sponsor Millennium Jump I found myself thinking: if ever I decide to communicate dangerously – and one has little choice really, in view of the dismal state of public phones – I’d pick their product as a show of support for corporations that support the arts without fear or favor.  What a privilege it is to be associated with the Instant Café Theatre Company!

Epilogue: On opening night there was a baldie in the 4th row who never laughed once.  Perhaps a wigless Samy Vellu had smuggled himself into the K. R. Soma Auditorium. The next day, some MIC flunkey actually cancelled the show.  Good ol’ Samy, he’s a regular showstopper.  But somehow the show goes on… at least till December 22nd.