The Sound of Thunderous Applause

At the awkward age of 15, suspended between a child’s ingenuous susceptibility to cuteness and whimsy ‑ and an adolescent’s desire to be cool and worldly wise ‑ I joined my parents at the Singapore film premiere of The Sound of Music. Of course, I enjoyed the experience; laughed and wept at all the appropriate moments, and thought Julie Andrews had wonderfully wholesome sex appeal.

As to be expected, cynicism soon set in ‑ and, inspired by the scathing critical putdowns of the musical’s unabashedly schmaltzy tone ‑ I soon took to chortling wickedly at corny feel‑good scenes underscored by that famous refrain, “The hills are alive/With the sound of music…”

But, secretly, I continued to believe in the possibility of a species of wholesome sex appeal which Julie Andrews so perfectly embodied. And I retained a healthy measure of respect for the collaborative musical genius of Messrs Richard Rodgers and Oscar Hammerstein II.

By the mid-1970s it was positively unhip to be caught singing along to middle‑aged, mainstream musical fare like those catchy tunes from The Sound Of Music. It was still permissible, of course, to shed a quiet tear or two in a darkened cinema while watching an equally uplifting musical like Lost Horizon. But, as a matter of principle, one did not go around thinking about staging a revival of The Sound of Music.

So when I heard that the Philharmonic Society of Selangor was embarking on a collaborative effort with the Kuala Lumpur Symphony Orchestra to stage a full‑scale production of The Sound of Music in Kuala Lumpur, I didn’t react at all. Later, when I found out that the irascible Rehman Rashid had been offered the role of Captain von Trapp, I had to smile but I did resolve to see the show, if only for a good snigger.

Well, folks, either the age of cynicism is over ‑ or I’m not the crusty critic I once fancied myself to be. Under the masterful direction (dramatic and musical) of Philip Chai, this production of that well‑worn classic is simply splendid.

When something works so beautifully and goes down so easily, there isn’t really all that much one can say about it ‑ except that I had to stand up and contribute to the thunderous applause that greeted the curtain calls. Of course, one could mention all the ones who shone in their respective rôles ‑ and nitpick about the few that didn’t. One can commend the conscientious and totally satisfying costume and set design ‑ and the unobtrusive (and therefore perfectly effective) stage lighting, And, of course, put in a good word for conductor Eric Lee and the invisible but exceptionally disciplined and accomplished KL Symphony Orchestra (I still think the pit is way too deep at the City Hall Auditorium).

But, at the very least, one must point out that the real magic was in finding the perfect Maria in the very delightful and vivacious Adeline Goh ‑ and a consummate Captain von Trapp in the very impressive and believable Rehman Rashid.

Add to that, the best possible Mother Abbess in the expansive person of Sandra Sodhy, a memorable Max and commendable Baroness Schraeder in Eric Roslee and Mary George, a lovable and enthusiastic troupe of young and not‑so‑young Kinder von Trapp… and we have the makings of a completely successful local staging of an internationally acclaimed Broadway musical.

After this, I’m positive that there is now enough collective experience and talent in Malaysia for mainstream groups like the Phil to take on almost any of the Best‑Known Biggies. My Fair Lady? Boleh! Cats? Boleh! West Side Story? Boleh! Porgy and Bess? Boleh! In the sphere of theater, if not economics and politics, Malaysia definitely boleh!

Revivals of Broadway musicals may not be my preferred theatrical diet, but I for one have always been eager to see our “guys and dolls” from amateur theater circles mature into a professional phalanx of practitioners ‑ and after Thursday night’s special treat at the City Hall Auditorium, I have no doubt that we’ve arrived ‑ right at the turn of the century and a new millennium. For those who missed The Sound of Music the good news is that it will probably be restaged in February 2000. Perhaps this time in the gleaming new Panggung Negara?

Sandra Sodhy as the
Mother Abbess

Pats on the back all around ‑ especially for the corporate sponsors who put up the hefty RM300,000 production budget. I’m sure the unbroken run of full houses is proof enough that theater, too, can be good business. But I hope present and future sponsors will be slightly more adventurous and occasionally underwrite productions that aren’t 100% mainstream, middle‑of‑the‑road, box‑office hits, We definitely need to hone the cutting edge if we wish to achieve excellence beyond repeating other people’s proven successes.

On a slightly darker note, I was pleased (in a perverse way) to note that there’s concealed subversion to be found even in the most innocuous theatrical fare. The rude intrusion of the Third Reich into Maria Rainer’s alpine world of sweetness, light, and innocence ‑ its violation of the Nonnberg Abbey’s rarefied sanctity and the quiet dignity of the von Trapp villa ‑ can be viewed as a classic dramatic device, a chiaroscuro effect that gives the otherwise fluffy storyline a dark, shadowy dimension ‑ I couldn’t help but feel how well it resonated with recent local events. 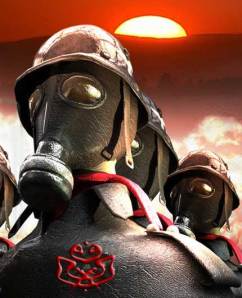 The Third Reich by Erafic

The sudden sinister turn, the ominous march of evil stealing suddenly upon the numinous domain of decent humanity, was particularly chilling as it evoked images of Gestapo torture, mindless robotism, the supremacy of the state, the rule of Might Is Right ‑ the ugly symptoms of a creeping fascism against which ordinary folk can only feel a sense of impotence and paralysis. The sort of abject powerlessness that breeds the ostrich‑like reactions of Max Detweiller and the Baroness Schraeder (who charmingly preach the “cornmonsense” of compromise and the “wisdom” of self‑interest and personal survival to a righteous, Hitler‑spurning Georg von Trapp).

And in the penultimate scene, as the ethereal grandeur of the Nonnberg Abbey chapel and graceful façade of the von Trapp villa are replaced by stark red banners emblazoned with black swastikas, I found myself silently reciting this little prayer: “God save us all, God save us all from the Barisan Nazi‑onal!” 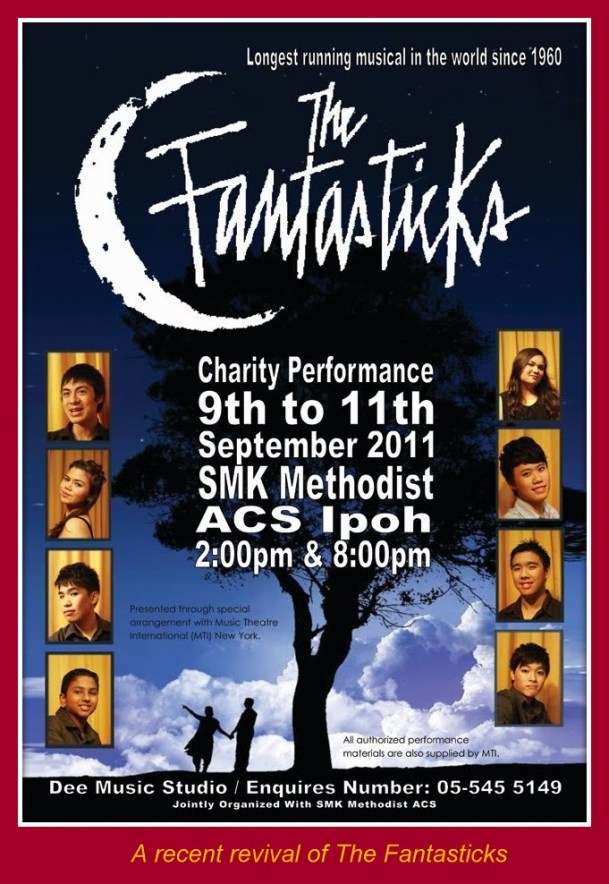 Antares mulls over the enduring and endearing appeal of The Fantasticks

The death of a king is a pretty tough act to follow. Music Theatre’s restaging of THE FANTASTICKS was set to open on November 22nd (2001). But it was canceled in respect of the royal passing. It was a somewhat subdued turnout the next evening, but cast and orchestra pulled through like troopers. Indeed, the chemistry was pretty much right.

Why THE FANTASTICKS twice in Kuala Lumpur within months? What makes it the world’s longest running musical (more than 18,000 performances since May 1960)? 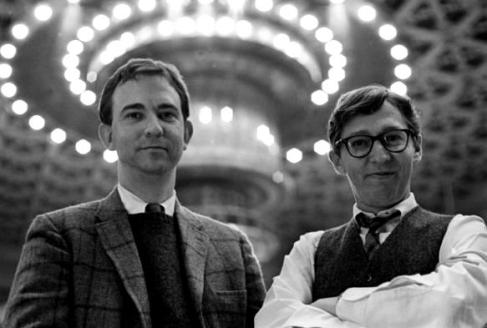 Tom Jones (book and lyrics) and Harvey Schmidt (music) got their inspiration from Les Romanesques by Edmond Rostand (of Cyrano de Bergerac fame). The title was rendered in English as The Fantasticks and the name stuck.

It’s a deceptively simple allegory of life and love: a boy and a girl, Matt and Luisa (or Romeo and Juliet, Tristan and Isolde, Candide and Cunegund, Adam and Eve); their manipulative fathers, Hucklebee and Bellomy, both avid gardeners; a Wall (portrayed by a whitefaced mute, doubling as prop-mover); a pair of buffoons in the tradition of commedia dell’arte or Laurel and Hardy; and a mysterious narrator/chorus/bandit named El Gallo (which means, in Spanish, The Cock).

This eclectic and magical mix of theatrical idioms forms a melodious and harmonious whole that weaves a wise and whimsical web of metaphors. Apart from Try To Remember, Schmidt’s tunes aren’t particularly memorable, but they’re catchy and vivacious – and Jones has a gift with rhymes (dependable and befriendable, children and bewilderin’). The storyline blends light and dark, gladness and sorrow, poetic irony and slapstick comedy, to highly agreeable effect.

Philip Chai with
a cup of chai

As a callow youth in 1968 I caught THE FANTASTICKS in New York. It was truly… well, fantastick! In the 1970s I saw it again in Kuala Lumpur but the production left much to be desired. Now along comes Philip Chai, the Selangor Phil’s veteran wunderkind and co-founder of Music Theatre – just the right person to direct a credible version of this modest classic using local talent. His Hucklebee was smoothly accomplished and enacted with grand gusto; a perfect ploy for Liau Siau Suan’s lovable and believable Bellomy.

Alex Koh’s rich singing voice made his stage debut as Matt a marvelous success, although he could do with some loosening up as an actor. Luisa was perkily played by the pretty and petite Maria Gomez, a professional songstress, also making her debut in local theater. She did extremely well, I thought, for someone who is unaccustomed to singing without a mike (she sometimes had to struggle against the orchestra).

The same problem with recording artiste Sharizan Borhan, whose El Gallo might have been much more masterful had his voice been more audible, his moustache less detachable, and his shirt less shiny; but on the whole his performance was laudable, even if his youth proved a slight handicap in this demanding rôle.

Choreographer and champion figure-skater Peter Choo was impeccable as the multi-purpose Mute, elegant agent of Fate and efficient shifter of scenes and props. His remarkable focus physically anchored the action even as it helped raise the drama to the required heights of imaginative fancy. It was a sheer pleasure to watch him at work.

As Mortimer and Henry (the Ancient Actor), Lim Soon Heng and Sham Sunder Binwani very nearly stole the show. Both turned in priceless performances and brought the house down with their vaudeville antics. Their clever use of vernacular accents added an entirely new dimension to the boisterous hilarity of their scenes.

One particular sequence did not fully satisfy: when Matt turns his back on “virtue” to explore the sensual possibilities of “vice” – only to find demons flailing at his mortal flesh – his pain comes across as no more than a Punch & Judy act. Somehow the effect wasn’t quite right. The darkness held no terror, there was no edge to Matt’s agony, no sense of diabolical dread.

Nonetheless I gratefully surrendered to the quintessentially theatrical magic of THE FANTASTICKS as resurrected yet once more by the energetic and talented Philip Chai. A special round of applause to the orchestra consisting of Tay Tai Wee on piano, Joseph Arnesto on double bass, and Karen Ng on percussion. The original score called for a harp, but it wasn’t badly missed – though that certainly would have been a heavenly treat.